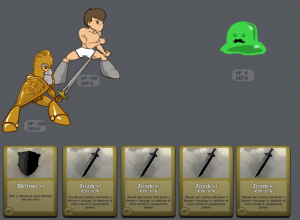 NOTE : This is a pre version in WebGL so if some graphics looks weird (like the card deck) it’s because it’s still under beta for Web version.

RogueRush is a prototype of a rogue like game currently under development.

TURN BASED BATTLES
RogueRush got an unique turn based system that use card battles, any piece of your character equipment got a deck of 5 action cards (may be attack cards, defense cards, special cards), with your whole equipment you got a total deck of 25 action cards.
You start with 5 card in your hand, picking cards one by one each turn. Meaning you cannot automatically choose if you defend or attack : your possible actions only depends of your current hand.

ROGUE LIKE
Each dungeon is procedurally generated (except for this prototype tutorial dungeon), as in any rogue like you got permadeath, and you’ll got an item ID system(more on this later), your goal is to fight your way through 5 dungeons getting bigger and harder.
The more time you spent on dungeon, the more items & equipments you’re likely to discover, unlocking it earlier for new games, allowing player to advance faster.

SUPPORT & CLASSES
Even if it’s a 1 player game, while exploring the dungeons you’ll be able to find friends helping you on your journey as support character(as a second player). Finding new teammates will unlock their new classes as playable character each time you’ll start a new game. (You start your 1st game with the knight class, you’ll unlock rogue,sorcerer,archer,and others..)
Each class got it’s specials abilities as special cards that you’ll unlock while levelling up.

ITEM ID
As in any original rogue games, there’s an Item ID system. You may find unidentified equipments or objects, meaning that there are special but you don’t know in what kind; it may be a cursed item or a blessed one, it varies at random. while unidentified the equipement will got « ? » cards that may be cursed or blessed cards with special effects that you’ll only see once you play the card.
The sooner you’ll ID the items, the better it’ll be; trust me, you don’t want to play cursed cards in a battle.

DYNAMIC EQUIPMENT
The stats of the player depends of it’s level and of the stats of the equipment wore.
Each time you wear a piece of equipment, you’ll see it in game. Each equipment got stats (ATK,DEF,DEX,magATK,magDEF), but good stats doesn’t mean good cards too. You can found a strong sword with basic attack cards, or a powerless sword but with special attack cards that can change the issue of the fight (well, if you got the chance to have it in your hand at the start of the fight).